I believe I promised y’all a Pope. And some nuns. Strap in. Obviously, my same secular disclaimers apply.

You see me waiting.

After Sunday morning brunch, and dire warnings from local new casters about two hour waits at the check points, we were off to the   lines to get through security and onto the Parkway to possibly, maybe, if we were lucky, see the Pope.

We had the good (?) fortune to be surrounded by a group of pilgrims from a Spanish speaking country, who serenaded us with music (or possibly “music”) while we waited. Unfortunately, they seemed to only know one song. And sang it over and over and OVER.

B was not impressed. I handled this with my usual parenting aplomb: 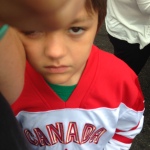 “This is the worst day ever.”

B: I hate this. I am having the worst day ever.

Me: Keep that up and this really will be the worst day you’ve ever had. The last one, too.

I may also have exclaimed at one point, “Yes, we came all the way just for this. The Pope is a BIG.F-ING.DEAL!” Fortunately most of the people around us did not seem to speak English. I will wait to receive my Best Mom Ever plaque in the mail.

For all the dire predictions, we only stood in line for about 45 minutes and were finally passed through a thorough checkpoint and dumped out into the Francis Festival Grounds, or whatever they ended up being called. (Popeapalooza field? Pope-stock?)

I have never seen such a variety of law enforcement. It was like some sort of bizarre career fair. We saw city police, State Troopers, DEA, TSA, Homeland Security… and the Secret Service were running the show, so you know they were lurking about muttering into their cuffs. Uniformed sniffer dogs were at work examining some musical instruments, and I had that awkward moment I often have in line at the airport, where I am trying to explain security measures without using words like DRUGS and BOMBS. You know, just in case. I don’t want to end up on a checklist.

There was plenty of time to walk around and survey the crowds, check out the OFFICIAL Pope Francis merchandise, and visit the port-a-potty villages that we had all laughed at, but were more than happy to patronize. The whole shindig was VERY SECURE. At one point, my friend pointed out men on the roof of a highrise apartment building overlooking the ‘Festival Grounds’. After I took a shot with my phone, he commented, “you know, when we get up there to the corner, you’re gonna be arrested.” And I had a moment – just one – where I thought, “Yikes! Maybe that will happen!” (It didn’t.)

Although we were with friends who are nearly as secular as we are, several of the groups around us were clearly devout. The group next to us spent the thirty minutes or so in the lead up to Francis’s arrival saying the Rosary, which led to a fun moment where I tried to explain the concept and function of the Rosary to several heathen children. (Well, mine’s a heathen. But I’m cool with that.) Since we were clearly in the safest place on the eastern seaboard, we sent B and his friend C off to play frisbee. They were joined off and on by some random kids, who may or may not have spoken English. Apparently frisbee is the international language.

Finally the jumbotrons showed us that the Pope-mobile was on the move, heading down the outer lanes on the far side of the Parkway. We waited as Frank made his way down to the Basilica and back up our way, with several stops to kiss babies. We crowded up to the police barrier with our neighbors, who were chanting, “PA-PA, PA-PA,” which has a much nicer ring to it than, “POPE, POPE, POPE.” And then, there he was, in his modified Jeep wrangler, in all his papal glory. And we got really excited. There may have been tears, and screaming, and waving, and kids on shoulders. (Although I was a bit disappointed that Francis did not ride on a papier mache likeness of the Vatican, pulled by a John Deere tractor, throwing (rosary) beads. Old habits…) Mr was in charge of getting video, but in the excitement got a great shot of feet as the papal wrangler rolled past.

So, final thoughts on Popeapalooza: